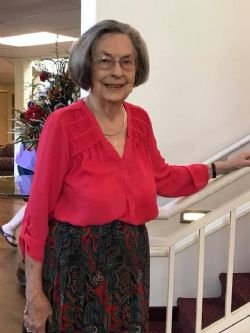 DOROTHY ANN SEALE MILLER KIMMEL
Our sweet Dorothy Ann gained her angel wings in the early morning hours of Saturday, May 14, 2022 at the age of 90 years, 10 months, and 14 days in the home of son James and Theresa Miller in the town of Mart, TX, McLennan County. Dorothy Ann Seale was born July 8, 1931 to parents Howard Oran ''Mike'' and Sarah Anna Williams Seale in Grapevine, TX. She attended schools in Dallas, Grapevine and graduated years later with a class from LaVega High School in Bellmead, TX. She was employed as secretary and bookkeeper with several companies, retiring from TSTC in January 1996. Her favorite of all was being ''Mother'' to her nine children. The greatest pleasures of her life were spending time with her family. The ones bringing her biggest smiles were her grandchildren, her great-grandchildren and her sweet little Shih-tzu, Lizzie, always by her side. One loving nephew remembered her always having a smile on her face and a happy chuckle for everyone. Dorothy Ann was involved in many activities even after she retired. She was a devout Christian since early childhood. One of her favorite activities was serving as one of the Founding Board of Directors of GodZone Ministries and TV where she served until she passed. She co-wrote 13 episodes of GiGi's Garden, a children's web service in which she was to perform the title role. This project was never completed due to her health. She performed roles in Heavenly High, An Unusual Hero, Sense of Urgency, Blind Date, and Homeless Henry. After raising her family she began to write very interesting and personable stories of her life to share with her family. She composed books for each family so more stories, pictures and adventures could be added. She loved crafting and tole painting classes, and projects with her sisters, always followed by major discussions and critiquing on whose Santa Claus was painted best. Of course it was always a three-way tie. Other voters remained silent. She was a member of the Red Hat Society and enjoyed monthly fellowship and luncheons with friends, all wearing red hats and purple dresses, most times. About four years ago, in 2018, she was nominated to be the Homecoming Queen from Grapevine High School, representing the 1948 GHS class for their 60th reunion. She rode in the parade on a beautiful convertible waving at the huge crowds on Main Street in Grapevine. She was honored and felt like a teenager again. Dorothy Ann was pre-deceased by her parents; her husband's/ James O ''Jack'' Miller, Henry Hollowell, and Harold Kimmel. Also pre-deceased by son, Dennis Miller, baby grandson, P.J. Miller, Jr., granddaughter, Shari Melugin; sister-in-law Jeanette Seale, brothers-in-law Ralph Baker and Sam McCalla; and her very special friend, Helen Reading. Dorothy Ann Kimmel is survived by sons Perry Miller and wife Marie, James Miller and wife Theresa, Stuart Miller and wife Cynthia, Daryl Miller and wife Sharon, daughters, Cheryce Miller Bartczak, and Shanna Miller Alexander and husband Billy, Carol Miller Melugin and husband Choice, DeeAnn Kimmel, daughter-in-law Judy Smith Miller. Grandchildren; Angela, Libby, Anthony, Amanda, Chrystal, Jacklyn, Brittney, Jaime, D.J., Jonathan, Cassie, Jake, Chuck, Courtnie, Megan, Kelsey, Rylee, Adam, Bradley, Brandon, Bryan, Jimmy, Tonie, Brandy, Bryan, Jessica, Samantha and a multitude of great-grandchildren and great-great-grandchildren. Also surviving are sisters Wynell Seale Baker, Marlene Seale McCalla, and brother Michael Oran Seale; and Sammie Harris, neighbor and lifelong friend who continues to be part of Dorothy's life throughout the years. In lieu of flowers donations can be made to: www.godzonetv.com. Funeral Services in celebration of Dorothy Ann's life will be Friday, May 20, 2022 at 10 AM.
Visitation and viewing will be Thursday, May 19, 2022 from 6-8 PM at:
Bellmead Funeral Home
809 LaClede/P.O. Box 154116
Waco, Texas 76715
254-799-5701
Graveside Services follow at:
Waco Memorial Cemetery
6623 South Interstate 35
Waco, Texas 76706
254-662-3430