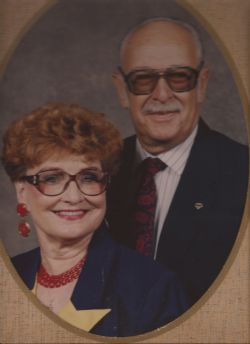 Mary Louise Woodliff, 89, entered her heavenly home on June 16, 2022, after living a long and fruitful life. A celebration of her life will be held graveside at Chapel Hill Cemetery in Waco at 10 A.M. on Saturday, June 18th, with Grant Kaul officiating.

Mary spent many years at Sears, first in the Receiving Room and then as an interior decorator. Eventually, she retired and began Interiors by Mary. She thoroughly enjoyed assisting her customers with their home improvements.

Mary & Gene loved traveling, especially going on cruises. They made numerous trips which were well-documented with pictures.

Mary was preceded in death by her husband Gene in 2011 and her great-grandson Isaac in 2012.

She is survived by her daughter Donna and husband Joe Wachsmann, her son David Woodliff and wife Brenda, her son Dwain Woodliff and Jill Demler; grandchildren Kristen Vrba and husband Jerry, Eric Wachsmann and wife Marion, Ariana Anderson & husband Leal, Alanna Woodliff and Sean Mason, and Travis Woodliff. Great grandchildren: Luke, Noah, Haley, Grace, Caleb, Sam, Elijah, Jordan, Alex and Meagan.
We would like to acknowledge 5 very special ladies who cared for Mary in her home as her Alzheimer's advanced: Jackie Greer, Larissa Greer, Lisa Greer, Sheryl Proctor and Tussy Smith. These ladies treated Mary like she was their own mom.

We would also like to thank the caring staff at The Atrium in Bellmead for making Mary's latter days as comfortable as possible.

Mary was the consummate hostess. She is now serving at the feet of Our Savior.