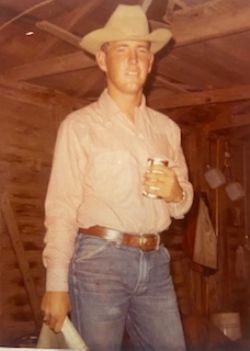 Jack Davis was the son of the late ''RC'' Robert Carter and Jessie Crisp Davis of Mart Texas. He was the seventh born out of 9 total children. As a child, he and his 8 brothers and sisters worked on the family farm where they didn't start public school like others until after six weeks when farming season slowed. He was raised in a very strict but incredibly loving home where his father took his role as head of household very serious. They all worked very hard and enjoyed Saturday nights when they were taken to the movies and shared family time. He was a member of Ben Hur First Baptist Church where he dedicated his life to Christ and soon became baptized in a stock tank as a young boy.
After graduating from Mart High School, Jack was drafted into the US Army. After serving his country, he went on to pursue an education in agriculture & ranch management at (today's) TSTC. He resumed his passion and love for ranching and farming by managing many operations in various locations in the state of Texas and Louisiana. Jack would eventually father four sons of which he dedicated his whole life teaching the value of family, strong work ethics and the golden rules to live as honest men.
Jack met Judy Engelke Davis in October of 2008 after his son Clint and Judy's sister Brenda Ellis persuaded them into a blind date. He knew instantly that she would be the love of his life. They married and blended families that brought him much joy. His brightest days were when his boys were all around him. He was his happiest when the grandbabies and soon great grandbabies came to see him. In gatherings you would see him napping with a new little one, rocking another or sneaking up on one of the older grands to give a ''NOOGIE NOOGIE NOOGE!''. His best gifts he leaves to this world are his children to pass on his legacy.
The family would like to thank Amedisys Hospice, specifically Vanessa and Reagan for the compassion and tender care provided to Jack as well as Judy. And the children would especially like to thank Judy for her devout love and unwavering caregiving through the last few years as Jack became closer and closer to his final resting place.
Pall bearers are Clint Davis, Jason Davis, Dennis Davis, Tommy Barnett, Jody Foster Buddy Engelke and Troy Nevills Jr. Honorary pall bearers are Andrew Macias, Tommy Buzbee, Greg Beltran, Bobby Christian and Clyde Woodard.
Jack was preceded in death by both parents, RC and Jessie Davis; two brothers, Larry Davis, Billy Davis, and a sister, Bobbie Jean Davis; Arthur and Janie Engelke.
He is survived by his wife, Judy Engelke Davis, sibling(s) Laverne Davis Oliver (Darwin deceased), Margie MacFarland (Ellwood deceased), Mary Jane Mitchell (Robert deceased), Donald Davis (Barbara), Randy Davis (Jackie); sister(s) in law Kathy and Will Strickland, Nancy Blankenship, Buddy and Mary Engelke, Brenda Ellis, Peggy and Tommy Buzbee, Christine Young, Margaret and Jeff Taylor. Children Lance Davis, Jason and Taira Davis, Dennis and Sharon Davis, Clint Davis, and Cody and Jordan Moore; Grandchildren- Jason and Rene Myers, Drew and Tara Young, David Normandin, Tylor and Lacee, Dakota and Ashton, Chase, Catarino, Sam, Richard, Jack, Anna, Faith, Juliana, and Lili. Great grandchildren Hazel, Haylo, Hoover, Annzlee, Amara, Ava, Cinch, Dalie and another one due late January of 2023 plus a host of extended family and life long friends.
Visitation
Thursday, July 28, 2022
6-8:00 pm
Bellmead Funeral Home
809 La Clede Street
Bellmead, TX  76705
Map & Directions