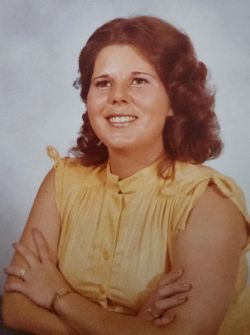 Pamela Myshell Roemer Hawkins, 67, fell asleep in death in the early hours of Monday October 17, 2022. Pam, the oldest of nine siblings, was born September 25, 1955 in Burnet, Texas to Franklin Oliver Roemer and his wife Homalyne Rogers-Roemer. She grew up in the small town of Llano Texas where she spent many a summer swimming at Blue Hole and enjoying the pleasures of a simple life.
Pam was a hard-working mom of four boys who spent years in service to others. Her love for people always showed through her beautiful smile whether she was bringing them their food or taking their photograph. Later in her life Pam started taking an interest in God and she began studying the Bible with Jehovah's Witnesses. Through this study she developed a deep love for Jehovah God and his son Jesus Christ and on May 25, 2013 she symbolized her dedication to Jehovah through water baptism. This love would help her to endure many difficult events in the years to come. Pam enjoyed being a part of the Lake Air congregation for several years and even though she had health problems she regularly engaged in the Christian ministry through letter writing.
She also loved the outdoors whether she was fishing or camping and looked forward to Paradise when her health would no longer prevent her from enjoying Jehovah's creation. She enjoyed playing games and never turned down an opportunity to challenge you at Rummikub. She would get so tickled when she actually won. Pam was very good with crafting and loved to ''bling'' things up especially her phone cases. Gorilla glue and some sparkle was all she needed to turn anything into a masterpiece. She was especially talented in using seashells. Many smiles were born from her little seashell animals and the seashell picture frames and mirrors that she would lovingly give to friends in the congregation as tokens of her gratitude. She spent the last few years of her life daily reading the Bible and often spoke of her appreciation to Jehovah for not giving up on her and for his ability to remember her boys and others she had lost to death. Her faith in Jehovah's promise of paradise at Psalms 37: 10,11 and 29 was so real that whether you knew her as Sister Roemer, Pam, Panda, Pammie, mom or Nana you can be sure that she will be looking for you when Jehovah opens her eyes.

Pam was preceded in death by two sons, Perry Roemer and Jason Reese. She leaves behind two sons Timothy Watson of Elm Mott Tx and Curtis Watson of Speegleville Tx. She also leaves behind eleven grand children and three great grandchildren. Ashlie Watson and her daughter Demie of Riesel, Kaylee Watson of Temple, Trey Watson and his son Micah of Beaumont, Steton Watson of Llano, Eric Roemer of Lincoln, California , Hunter Roemer and his daughter Maddie of Llano, Jayla Roemer also of Llano, Coy Simek of Round Rock, Britney Simek also of Round Rock, Johnna Reese of Llano and Kaleb Reese also of Llano. She also leaves behind her mother Homalyne Kilgore of Llano along with all of her siblings, and many spiritual brothers and sisters in the Lake Air, Bellmead and Northcrest congregations that she loved like the were part of her fleshly family.