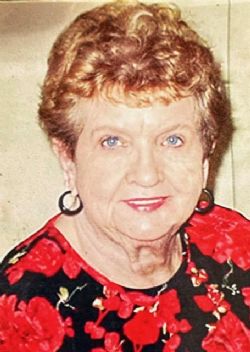 Gloria Manuel Hjelmstad was born on November 23,1930 to Arthur Tennyson Manuel and Lavinia May Hough in Huntington Township, Pennsylvania. She graduated from Smithton High School in 1947.
Gloria was an avid history buff and witnessed a lot of history, to include the Hindenburg flying over her farmland before its tragic demise. She also remembered hearing the announcement on the radio about the attack on Pearl Harbor by Japanese forces, ushering in the beginning of World War II.
Gloria also had a vast collection of history books ranging from Medieval history, Civil War history and WWII history.
Gloria married Peter James Hjelmstad on November 1st 1960 in Miami, Oklahoma and were together for 60 years when he died.
Gloria was a very loving mother and outstanding parent. She will be dearly missed.
Survivors include two sons, Thoralf Hjelmstad of Tennessee, Peter James Hjelmstad Jr of Waco, and daughter Jenna Cadena of Bulverde, TX.
Gloria will be interred with her husband at the Central Texas Veterans Cemetery in Killeen, TX at 11:00 am Monday, January 23, 2023.
Service
Monday, January 23, 2023
11:00 am
Cent. TX. St. Veterans Cemetery
11463 State Highway 195
Killeen, TX  76542
Map & Directions