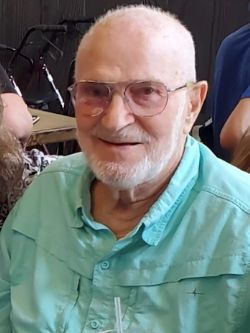 Luchin Edward Hyde (Ed) was born in Remus, Michigan on August 8, 1932. He was the youngest of five children born to Jessie Beryl Trethric and Charles Henry Hyde. When Luchin was born, his brothers told their parents they would not play with him if they had to call him ''Luchin'', so he was called ''Ed''. Ed and his siblings were raised on a farm. When in high school, Ed attended Adelphian Academy in Michigan where he met many lifelong friends. After high school, he joined the Army and was stationed in Germany and France. In France, he was the Army French Interpreter. He was so fluent, most people could not tell he was an American. He later moved to Texas where he met his first wife, Margie Crane. When he learned his first daughter was on the way, he joined the Air Force for his life long career. Throughout his 20 year career in the Air Force, he was stationed in Texas, Colorado, England, South Carolina and Maryland. In 1971 Ed was stationed in Viet Nam where he served for one year. He later retired from the Air Force while stationed in Fort Worth.
Ed enjoyed cooking and after retirement, he opened a diner in Keene, Texas called ''Ed's Hoagie Hut''. It was very popular with the local community. He sold it in 1976 and moved to Cleburne, Texas and went to work for Frakes Aviation. He later moved to Waco, Texas to work with an owner of a boat company who he had met. His last job was for Alliance Auto Auction where he drove vehicles to and from auctions in Texas. He worked there until his 88th birthday and decided to retire again.
He was a devoted follower of Jesus Christ. Wherever he went he would invite others to have a personal relationship with Jesus Christ to have forgiveness of sin and to obtain Heaven as their eternal home. He was a member of Oaklawn Baptist Church. While at Oaklawn Baptist Church, he met his wife, Wanda. They married in 2003. They would often stop in at Sam's Club for lunch. They developed many close friendships with employees there. Wanda passed away in 2017 but he remained a faithful Sam's visitor. He developed friendships too numerous to count. He frequently kept in touch and visited his nieces and nephews through the remainder of his life no matter what state they lived in.
Ed was preceded in death by his parents, Charles Henry and Beryl Hyde, Sister Frieda DeGroat, Brothers Frank, Wayne and Albert Hyde, Grandson Brad Fowler and wife Wanda Hyde.
He is survived by his first wife Margie Hyde, daughters Cherie Hyde, Denise Maxwell and husband Donald and Elita Shaw. Stepchildren, Bonnie Sinclair and husband Robert and David Szanto. Grandchildren Kerry Scarber and husband Chance, Kristopher Maxwell and wife Katie, Kasey Maxwell and wife Alicia, Audra Reed and husband Brannon, Tiffany Puyear and husband Keith, Clinton Shaw, Jessica Shaw and Cassidy Shaw. Step Granddaughters Mary Heirsig, Toni McNulty and Sara Sinclair. Great Grandchildren Kameron Maxwell, Robin Scarber, Keeleigh Maxwell, Alana Maxwell, Audrey Maxwell, Katelyn Walker and husband Justin, Stacey Scarber, Kelton Henderson, Kierstan Osseweyer, Ashlyn Fowler, Latham Gilbert, Keyton Reed, Kelsey Reed, Addison Puyear, Keaton Puyear and Elijah Garcia. Great Great grandsons Kase Walker and Colter Walker.
The family would like to express their sincere gratitude to the multiple friends and neighbors who kept an eye on and assisted our father in order allow him to remain in his own home. A special thank you to all the staff who were assigned to care for him on the 4th floor at Ascension Providence Hospital. They were all truly amazing.
Ed is greatly missed by everyone who knew him.