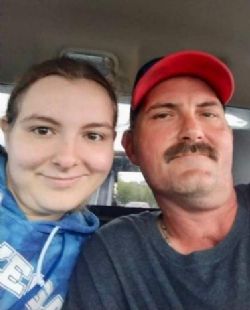 Jerry Wayne McCutcheon passed away 11/15/22 at the age of 37 surrounded by family and friends. Jerry Wayne was born March 9, 1985 in Waco, Texas to Jerry and Annette McCutcheon. He attended La Vega ISD. He was a loving and devoted father to his daughter Kalista and honored his parents. He was one of the kindest men you could ever meet. He would give you the shirt off his back if he thought you needed it. He was always there to help a friend or neighbor. Jerry Wayne had a small vinyl business where he made car decals and shirts, especially for memorials. Jerry Wayne also worked in security but was mainly a tow truck driver. One of Jerry Wayne's best friend was his dog Rusty who now misses him dearly. He was preceded in death by his grandparents John P and Mary McCutcheon, his sister Crystal McCutcheon, uncles Jack McCutcheon, Mark DeBoer, Joe McCutcheon, and Aunt Gail McCutcheon. He is survived by his parents Jerry and Annette McCutcheon, brother Billy Joe McCutcheon, sister Sherry Shaver, daughter Kalista McCutcheon, stepson Calix Harabedoff, wife Desiree and many others including grandparents, aunts, uncles, cousins, and lots of great friends that Jerry Wayne considered extended family.
Visitations will be held at Bellmead Funeral Home Monday, 11/21/22 from 6:00-8:00 pm. Graveside services will be at Centerlake Cemetery near Holland, Texas Tuesday, 11/22/22 at 1:00 PM.